PRAANESH PRASAD has stepped up to the crease and is planning a gainful innings as he takes on the role of CEO at RTI – Real Time Instruments.

A mechanical engineer by profession – and yes, a self-confessed cricket tragic – Praanesh has spent the past 25 years immersed in the mining and minerals processing sector.

No stranger to Central Queensland, Praanesh said bold plans for growth and a keen focus on yet untapped international markets made the move to RTI – and its world HQ in Mackay – a logical and exciting step in his career.

From supplying heavy haulage trucks, engineering consulting, automation and process control, workforce management and project management, he has been part of teams across Africa, South America, Indonesia, Canada, China, and Australia.
Praanesh joins RTI after a stint at Adani Australia where he was Head of Commercial and Program Management, and he spent six years as Global Head of Mining and Metals at Honeywell.

Over the years he has spent a considerable amount of time in Central Queensland so taking on the CEO role at RTI was a return to familiar surroundings. He is a keen fisherman too, so making the move to a location with one of the highest rates of boat ownership per capita in the country was never going to be too difficult.

Praanesh’s involvement with RTI started several months ago and at the centre of his decision to take on the CEO role was the attraction to the highly competent and skilled team, based out of Mackay, supplying the global mining industry with high technology analysing devices and solutions.

“To think that a once family-owned business, out of regional Queensland, is a world leader in designing, manufacturing and supplying critical technology solutions to more than a hundred mining operations globally – this is a fantastic success story,” Praanesh said.

The team also has audacious plans for the next few years.
“That was something I felt I had to be a part of.”

Indeed, Praanesh is excited to lead the RTI team through this next exciting chapter, as the organisation goes about growing its already impressive global footprint.

“We are providing solutions for the monitoring of bulk materials, in real time, for parameters such as ash, moisture, density, and specific elements – to name a few. 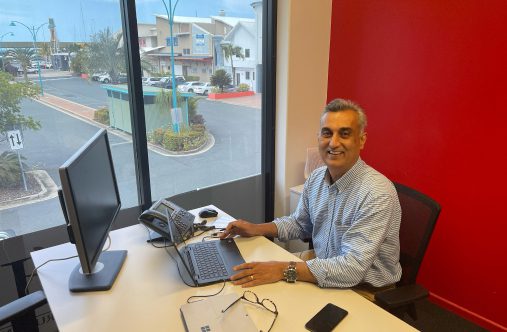